I'm doing two reviews today so let's start with the child-friendly one:

Summary: I liked it until the final season. If you have seen all six Jurassic Park/World movies, you'll probably like this five-season Netflix series. They do not really break any new ground here. It's dinosaurs, more dinosaurs, and children. The kids want to save the dinosaurs, while the dinosaurs want to eat or stampede the children. The adults are about as helpful as the ones in A Series of Unfortunate Events, which is to say they are either evil or incompetent.

Cons: Fairly predictable plot. Kinda scary dinosaur attacks, especially for the young age group this is aimed at (people totally get eaten, not on screen but you see the person and the dinosaur jaws and the camera cuts away with a scream so yeah). But the biggest negative: Romance :( I am not a fan of any children's series pairing up their pre-teens (how old are these kids? I am not sure. But they are not college aged, so that is too young for romance in my opinion). From the beginning there is a popular rich guy and a shallow blogger girl and you just know they're gonna be paired up. But in the final season the production team decided to pair up both a hetero couple and a homo couple and I feel strongly that they should have just left it all as friends. This show could have just been about pre-teens bonding over dinosaurs and crazy escape attempts and it would have been great.

Doctor Strange in the Multiverse of Madness

Summary: Did not like. Would not watch again. Why? Because it was super duper creepy, horror movie style. If horror movies are your thing, maybe you will like it. But it heavily (in my opinion) relies on earlier movies in the MCU (as most in the MCU do at this point), and it influences future movies I'm pretty sure, so you need to be a MCU fan and a horror movie fan.

Pros: Can't think of any, other than continuing a few stories in the MCU (namely those of Doctor Strange, Scarlett Witch, and a new hero).

Cons: Super duper creepy. Dark magic, zombies, possession, demons, disgusting violence that I didn't watch because they telegraphed what was going to happen so I could disengage until my husband signaled that the gross part was over. I'm glad I didn't watch this one in theaters because I used my phone to escape from the creepiness and grossness of several portions.

Slight spoilers here: "I am not a monster" says the character who is murdering heroes so she can kidnap a child to sacrifice so she can steal children from a loving home.

Summary Restated: If horror movies aren't your thing, just get the Spark Notes / Wikipedia summary and enjoy the next MCU movie (not sure what that will be).

Posted by Lauren Conrad at 11:28 PM No comments:

My state has a bag tax, which means I try to keep some reusable bags in my vehicle. But I don't have a good place for them! My glove box is full of papers, and my doors are full of sunglasses and an armadillo (graduation present from my then-7-yr-old brother). So I made a loop that fits over my gear shift! Here's what I did:
1. Made a chain that fits over my gear shift twice (hold the ends together to make a loop, slide over the shift, twist, slide over again - if there's some wiggle room, you're at the right length!).
2. Slip-stitch the end to the start to make a loop, then single crochet all around. Cut yarn and finish off.
To use, slip the loop over your gear shift. Slide the bags onto the loop (you need the kind of reusable bag that has a little loop for hanging). Loop the loop (haha) back over the gear shift. Secured! 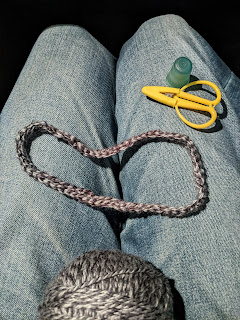 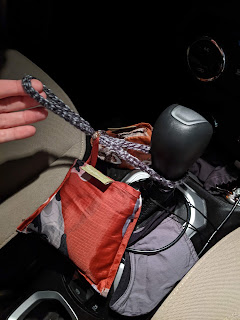 Here's the loop on the shifter, with bags slid onto it. 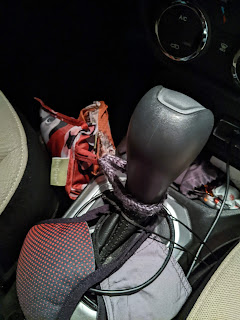 And here's the bag holder holding bags.
Hope this is a helpful addition to your car!
UPDATE: It's not just for bags! This pattern is what I used to make bootloops / bootstraps for my ski boots and snowboard boots. You loop the loop through the loop on the top back of the boot to hold the boots together for ease of carrying. You can make the loop a little thicker for this (add another round or two of SC) so it's more comfy in your hand, since ski/board boots are not light.
Posted by Lauren Conrad at 2:08 PM No comments: