Ok, so have you watched Avatar: The Last Airbender? There is an amazingly cute animal on that show called a turtle duck. Ever since finding a (paid) duckling pattern from Little Conkers, I have wanted to figure out how to make a turtle duck. And I decided to just go for it after finding a turtle pattern from Pink Mouse Boutique! I crocheted this little guy for my little brother who is graduating college (WOW how is my little brother already at that milestone???) so this is scheduled to post after I've given him his gift. I might need to make one for myself as well because it's just too cute. All in all, took about two hours to crochet and assemble.

First off, here are the patterns:
Duckling from Little Conkers - this one is not free but it is very well written and totally worth a few dollars.
Turtle from Pink Mouse Boutique - this one is free

NOTE: with the duck feet, I did NOT do the heel bobble, since we want to attach the feet flat to the turtle, so just skip the bobble. I added a turning chain to keep it smooth. You also don't need a tail on the foot since we are stitching it right in like the turtle pattern says.

I used a 3.5mm hook for both patterns and that made the sizing work out. Which was nice because I did not want to figure out what size hook to use on each pattern to get them proportional. It could be argued that the feet are a little big, but I see that as endearing. The colors were just yellow for the head and belly, orange for the bill and feet, and a variegated brown for the shell. I put in some safety eyes and used a yarn needle to stitch the pieces together. 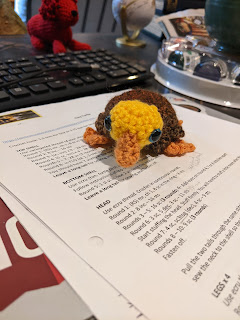 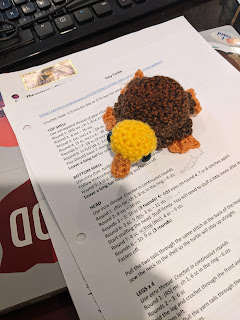 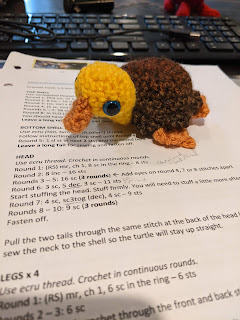 Posted by Lauren Conrad at 1:00 AM No comments:

There is a very popular brand of pacifier, the Soothie, that works great and does not have anything attached to it, so it's very safe for little babies. But you know what's annoying about a pacifier with nothing attached to it? When you drop it, it disappears. Especially if you have it in light pink and you have light tan carpet. One time, we searched all over our bedroom trying to find this pacifier, only to slip on our slippers in defeat and find it somehow had gotten inside one slipper. How??? Anyways, I crocheted a little dangle that loops onto the classic Soothie so when you drop it you can find it! Also, my baby girl (who is one year old) likes to fiddle with the dangle and can use it to hold her pacifier more easily. What if you don't have the Soothie but rather some other brand? Well as long as it has a hole, handle, or some way to pull the dangle through and wrap around, it will work! If you have something like this, sorry there's nothing to attach the dangle (well there are the corner holes but then the yarn will be pressed against your baby's face and it will get gunky fast and trap moisture which is bad). 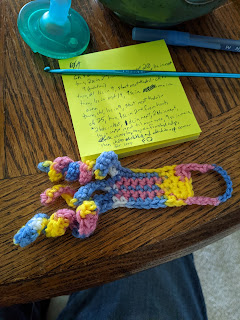 Unattached (above), you can see it has three dangles below the main area which has the loop on top, used to attach to the pacifier. Below, two pacifiers with their dangles (the pink one has the dangle made in this pattern below, the green one is a variation on the pattern). The pink one is attached to the edge of the pacifier which is not the best as it is against the baby's face, i.e. gets gunky fast. But these are easy to detach and wash so that's a plus! 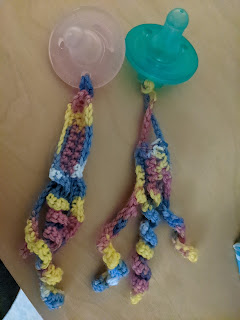 UPDATE: This pattern can also be used as a luggage tie! To make your bag stand out a little more on the carousel with all the other similarly shaped and colored bags. Pick a vibrant yarn and make your bag distinct! Loop your luggage marker on a zipper and you're good to go.

There is a lot of leeway with this pattern. I wrote it with a 9-stitch main block, but my previous one has more like a 5- or 6-stitch main block. Also, I gave the previous one a longer top loop, maybe like ch30 rather than the ch20 on the pink. Lastly, there are many options with the tendrils. I picked variations from Nicky the NICU Jelly's tentacles, but also have made up some of my own variations.

Yarn: I used a slimmer yarn, maybe sports weight, because the hole in the pacifier is not very large.

Row 3: Turn, 1SC in 2nd from hook and all the way to end [straight tendril which will still curl a little]

Finishing: SC around top corner and across top of piece, then ch20 and attach to opposite corner for the loop. Cut yarn and weave in ends.

To attach: push the top loop through the hole in the handle of the pacifier, then pull the tendrils through the loop. <-- this is why it's important to not use a bulky yarn or bigger hook. If you want to use either, then just switch to the slimmer/smaller for the loop portion (finishing step).

You can do whatever length you want, and however many you want. With just two it looks a bit slim, and I haven't tried with more than three (might be bulky). The important thing is to keep the main area the same size above each tendril, otherwise it looks a little wonky.

You can do a bubble pattern, so on the way back up the tendril do *1SC, 1TripleCrochet* repeat til the main area. The Triples will 'pop' out and your kid can fiddle with pushing them back and forth.

You can vary the curliness by adding or dropping stitches, like in the jellyfish pattern she has *2SC, 1SC* instead of 2SC the whole way back. You also could try 2DC or varying *2DC, 2SC* all the way back. So many options!

Posted by Lauren Conrad at 11:00 PM No comments: