I get migraines. My friends know this. I've tried different medicines and was on a daily suppressant (beta blocker) but wanted to step down from that. I worked with my doctor and halved my dosage with no change, so we halved it again with still no change, so I stepped completely off it and started getting migraines every other weekend or so (just like I use to). I get them when I hit my triggers, like irregular meals, stress, dehydration, different weather patterns, and hormonal changes. I can avoid some of these triggers but not all, and even the avoidable ones happen sometimes because it's hard being so structured.
My friend Cory got this ear piercing (daith) and it basically solved her migraine issues. She said I should try it and I figured why not, if I don't like it I can just take the earring out and keep going on my migraine journey.
When I was up in CT for Christmas, I went with Cory and my mom to get the piercing (I was the only one getting pierced - Cory was there for guidance and my mom was with me for moral support). We went to Eminence Ink in Willimantic, CT, and had Lily helping us (she was the one who had done Cory's piercing). 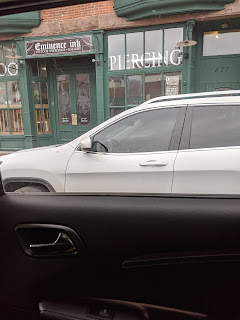 Interesting fact from the Red Cross - if I had gotten my piercing in MD, I might have be banned from donating blood for a year. Since I got it done in CT, I'm good to donate. This screen capture actually says tattoo but I believe it applies to piercings as well since they are done in the same facilities (unless you use a mall kiosk). The more you know....

Let me be upfront about this: it was the most painful experience I have ever willing done. It was not as painful as my four-wheeling accident (where I got thrown from my quad, tumbled down a mountain, then got run over by my quad and tumbled further down the mountain) which involved a back injury and those are really the worst (also dislocated my knee and pretty sure got concussed).
I went at noon and had a granola bar before hand and another one in my pocket for afterwards. You don't want to do this on an empty stomach cause you could pass out - kinda like when donating blood.
I was seated in a chair in a private room. Lily cleaned the area and then started the piercing. The first pierce wasn't bad, felt kinda like a normal ear lobe piercing, but then it kept going because it's not a straight-through piercing, it's kind of a hook so you have to go in (not too bad), come out (bad), then I think slide the piercing tool out (getting even worse), then get the earring bar in (I was saying OUCH OUCH OUCH and getting really pale at this point), then twist on the balls on either end but we had to take a break before finishing that because I was not doing well. I nearly puked and nearly passed out. Lily had a standing fan next to the chair so she turned that on and gave me a lollipop for sugar and a cup of water and I was shaking SO BADLY and then I dry heaved. She said it was the adrenaline from the anticipation which was true but also it hurt really badly and for whatever reason, my body likes to puke when I'm in pain. It's annoying. So once I calmed down again (i.e. stopped uncontrollably shaking and had some color back in my face), she went back at it with twisting the balls on the ends of the earring. There wasn't much blood but there was much pain but at this point the worst was over. I then paid for it and some cleaning/numbing spray for it (about $70 for the piercing and $5 for the spray) and they said I really needed to get some lunch.
The piercing itself would have been quick if I had not nearly passed out and puked. It's a quick clean, stab, stab, twist, twist, done. But I think it took over an hour due to me not handling things well. In the end, here's the bar: 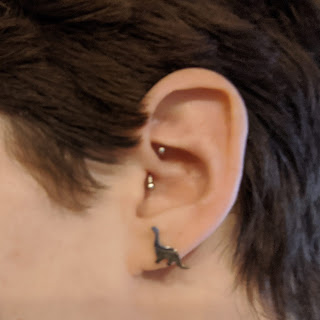 I can't see it when looking in a mirror, and you can only see it if you're looking at the correct angle at my ear (clearly per the picture, it is visible from at least one angle).
The piercing was done on December 26. I used the cleaning spray three times a day with a cotton ball in CT and a cotton square in MD. It was super sore right away (normal) but then it started feeling infected, like warm and tender and I got worried. I was told by my sib-in-laws about ear syringes which sound scary but are actually similar to a water pick but, important distinction, with a soft tip. I got one from CVS (can't find it online but it's similar to this) to clear out the ridge where the top of the earring is (it's too tight for a q-tip) and then the inflammation went away and all is now well! In hind sight, Lily had told me to wash the area before putting the cleaner on it, but I couldn't figure out how to get in there (also it really hurt to touch it). Squirting water in there is the way to go! 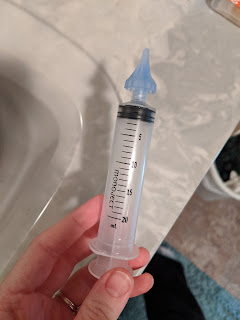 Now the real question, will this piercing fix my migraine frustrations and lower their frequency? Well, truly only time will tell. I have only had it a week, but no migraines in that week! Of note, the last 5 years I have gotten a migraine over the Christmas to New Years time, and this year I did not get a migraine. So that's nice! I will aim to update in a month or two and say how things are going.

UPDATE:
It's been one day less that two months, but Tuesdays is when I do my blog so we're updating at this point.
Sad news first: I have had migraine since getting my daith pierced. I actually had the worst one in recent memory which kept me up at night and made me sleep deprived and I went to to Urgent Care which was a first for me and they gave me a shot for the pain.
Good news next: I think it is helping somewhat. I have noticed that my ear slightly hurts at times when I could be getting a migraine coming in but instead it's just some ear discomfort which is much preferred over a migraine.
Ending Thoughts: For some people, the daith piercing totally works and their migraines are gone. For other people, it does nothing and they still have migraines. For me, it is helping a little and maybe as it heals (it takes about a year to heal) it'll do more to fight the migraines? Who knows.
Posted by Lauren Conrad at 4:56 PM